There are so many voices crying out to us, but the Voice of truth, tells us a different story. With the violence that seems to happen with no warning still has everyone more aware of what's going on around them, we feel it's a good thing. We should be aware. Our enemy, the devil roams about like a roaring lion, seeking some to devour. But OUR GOD REIGNS!
Saturdays outreach to celebrate Mother's day and the Day of the Child before we leave, left me thankful for God's goodness and protection. Hundreds of people came, along with a clown named Juan. Jaime brought him, and he had everyone in tears, laughing so hard. It was a joy to see all the smiles, and hear the laughter . Is there still a risk? Sure. Is there reasons to be more cautious? Yes. Is there reason to abandon the colonia and do something else. ABSOLUTELY NOT! We serve a God that is in complete control of our life. Our days are numbered by Him. So evidently fear has no place in ours, or any other believers life, doing what God called anyone to do.
I completely understand parents not sending their kids on a missions trip to areas in the do not travel warning areas of the world, so we're going to keep on bringing smiles to those people who are hurting, lost, afraid, poor, and needy. But that's just me! Do what God tells you to do, and you won't need to explain anything.
Blessings to all that pray for us and support the ministry. 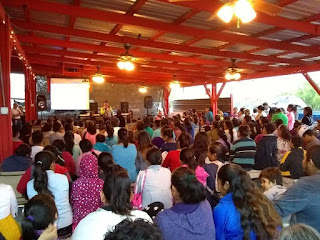 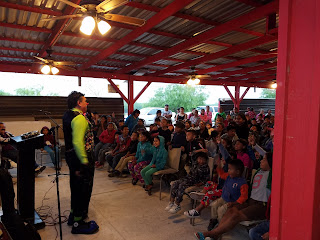 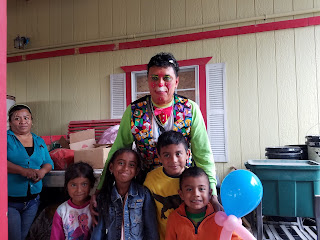 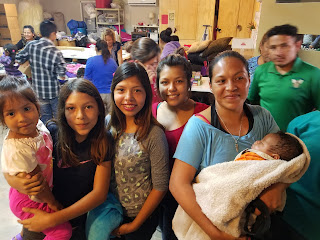 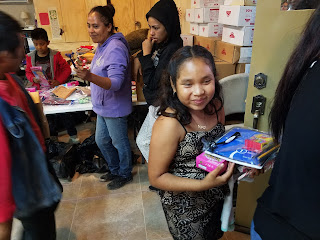 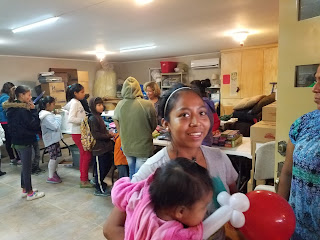 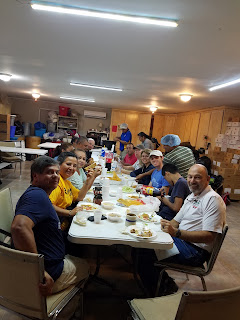 A MINI SABBATICAL IS WHAT IT IS

With the occasional violence in Reynosa, some supporters decided to rent a house in Bulverde, just North of San Antonio, and treat us to a few days away. What an extravagant house! We joined Mark and Kathy Grennell, Hans and Debbie, Ricky Torres, Jaime and his family , and Sergio. We enjoyed the 4 days of fun, fellowship and food. Oh and a few rounds of golf.
We returned home yesterday afternoon,  so Paula could host her sewing class and our weekly bible study, through the book of Romans. We had 13 people there today, it was great. Me and the boys continue working on our house in the colonia. Insulation and siding inside really makes a huge difference inside.
Tomorrow we will take more siding across and lots of food for Saturday's outreach. We will celebrate the Day of the Child, Mothers Day, and give out food, school supplies, gifts for the Moms and kids.
We will be heading to Illinois sometime next week, to help Kristin and Larry pack for their upcoming move into their new house in Frankfort, Il. Lea time, YEA!
The guys will be building a house or two while we're gone. We have been evaluating when we will feel comfortable hosting teams in Mexico. We have had no issues lately and that's an answer to prayers. Thanks for continued prayers and support. We look forward to seeing some of you in Illinois next month. 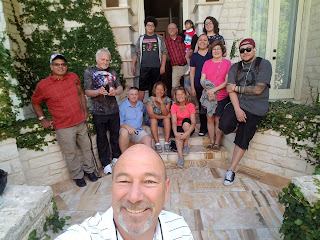 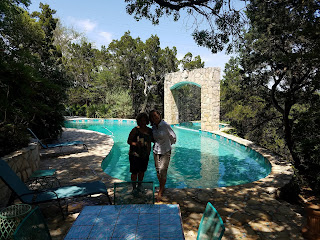 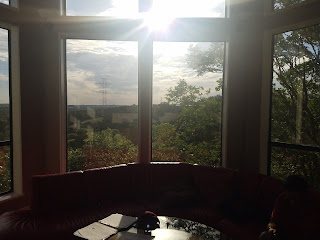 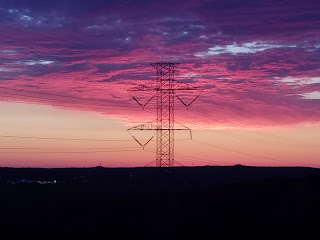 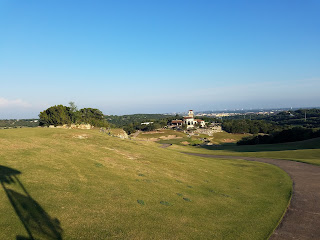 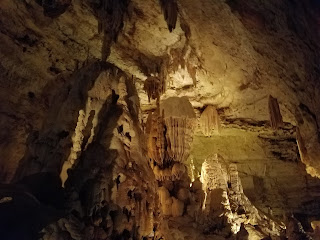 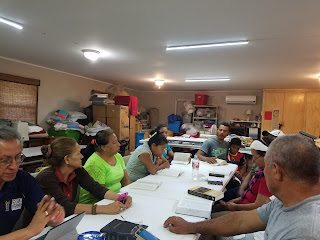 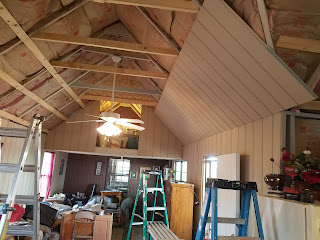 DEDICATION DAY CELEBRATION IN SPITE OF!!

The two houses built last week had to have an official dedication,  so Monday  we arrived in the colonia around noon for a 2 o'clock scheduled dedication . After another incident,  we decided to go and bless these two families with the beds and furnishings we purchased. Jose and Alicias house was first because all the food was at Roberto and Edinina.
Jose and his family used the rest of the purple paint to trim out the inside of the house. It looked awesome, and they covered their floor with a thick plastic, to cover the flaking concrete. Shawn and Carla came as well as Jaime and his family. They were all brought to tears as we prayed over them and Jose lifted Alicia and carried her home. The two kids loved their own space up in the loft.
We then moved up the hill to the other house, where they had prepared a literal feast. Steak, chicken, sausage, tortillas , salsa, and beverages. The question was, eat first, or dedicate the house. We prayed over Roberto and Edinina. He has dialysis therapy 3 days a week, and Edinina had knee surgery 2 months ago. What a great time, seeing the joy on all of thier faces.
Tuesday brought heavy rain for the first time in a while. Paula was in Mexico and I took Shawn and Carla Estes to the airport to go to a conference in Louisville , with David Platt speaking. I'm so jealous. His book Radical, changed our lives.
Yesterday Sergio and I picked up 10 pallets if soon to expire Fema food boxes. Each box has quite a bit of food, and we have already given a lot away in 2 days.
We have a contractor coming tomorrow to clean and coat our entire roof. It's been on our things to save $ for, and although I hate to spend money on "ourselves", it is much needed.
Please pray for peace in Mexico. It is really messing up missions and a few groups have cancelled their trips with others desiring to work on the US side th 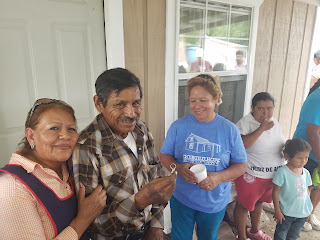 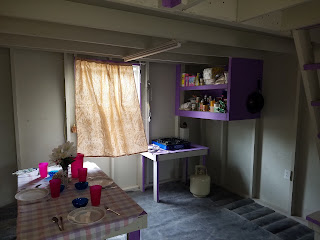 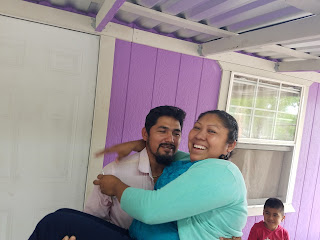 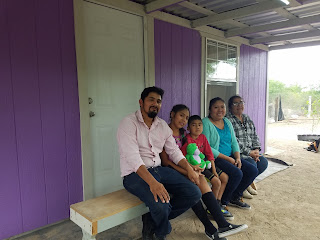 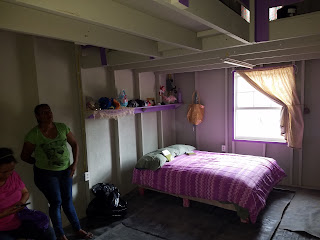 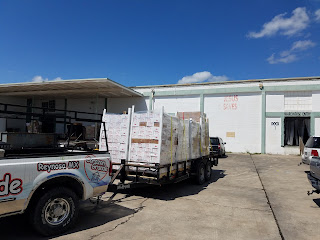 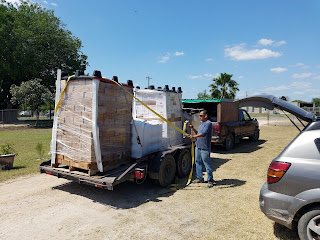 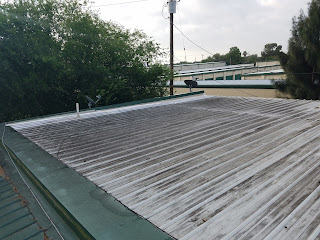 Last Monday , Emanuel Baptist Church from Kentucky,  joined Shawn and Carla Estes, to "Spend" themselves on behalf of the poor in Mexico . The team of 17 split in two groups, the women went to Pillar Esperanza Orphanage to serve the staff and kids, and the men joined us building a house in the colonia.
Since we had so many to build the house, our  friends in the colonia built a house two lots over from Jose's. The natural competitive juices flowing,  the race was on to finish before the other team. It was fun, because we could see each other's progress as we built. We conceded a draw as it was that close on Wednesday afternoon as Thursday only needed some finishing touches on both. A job well done by both teams .
Thursday morning, we arrived at the Community Center with just a few of the team from Emanuel to finish a few things, while the rest of the guys joined the women at the orphanage . While hanging around outside, heavy automatic weapons fire broke out on the lower level of the road in front of us. Two rival gangs crossed paths in front of us, and what first sounded like firecrackers had us all running for cover. Praise God we were all ok, but noticeably shaken. It lasted seconds but it was a few minutes before we felt safe to go outside.
The Mexican Military arrived in 10 minutes or so, and we held our morning devotion , prayed, and went and finished the two houses. We felt led to cancel Friday's dedication of both houses , because of safety concerns for the team. The families understand our concerns, even though they live in this environment every day. Some more gunfire in the distance was heard several hours later and just confirmed our decision to cancel dedication celebration.
I am going to contact all scheduled mission groups that are planning on coming the next few months and apprise them of our concerns. It's one thing to for Paula and I,  and Shawn and Carla, and all those that are missionaries in the world, to engage in a certain level of risk to do what God has called us to do, but we are not willing to risk the safety of others, and cannot guarantee the safety of others.
Please pray for peace to overtake Mexico and the drug and human smuggling to stop in Jesus Name, wisdom for us and all that serve in Mexico. 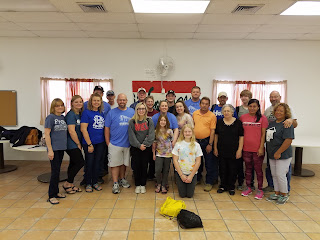 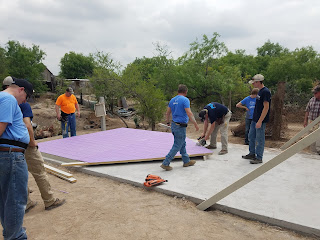 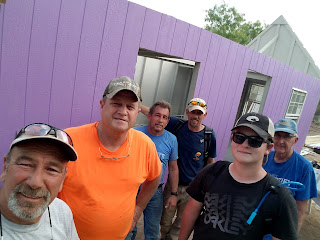 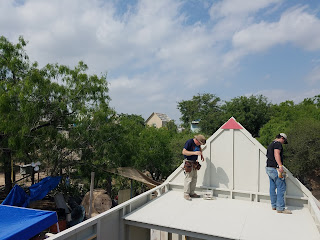 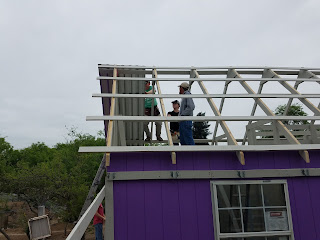 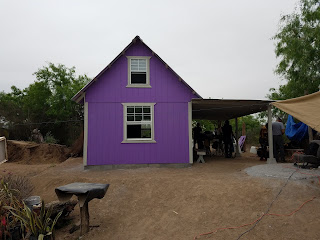 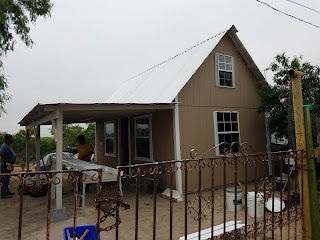 We brought the team to our house Friday after breakfast in Mexico,  even though we didn't dedicate the houses with the group, we will on Monday. They bagged beans at our place, cleaned up our nasty pile of pallets, and then headed to Progresso Mexico to the market before flying back home.
Posted by Bruce and Paula at 4/07/2018 07:25:00 AM No comments: